Spaying or neutering your dog is one of the many responsibilities of being a pet owner and has shown to have numerous health benefits. Every year over 50,000 unwanted pets are euthanized in Ontario shelters due to overpopulation.

What does neutering/spay a dog do?

Spaying and neutering a dog involves the removal of the reproductive organs. This procedure prevents animals from being able to reproduce and also stops the production of certain hormones such as testosterone and estrogen.

Neuter (also called orchidectomy) is the term used for describing the surgery performed on male dogs so they are no longer able to reproduce. In this procedure, the testicles are removed through a small skin incision near the scrotum.

Spay (also called ovariohysterectomy) is a term used for describing the surgery performed on a female dog in removing the uterus and ovaries, so they are no longer able to reproduce.

Why is it important to neuter/spaying my dog?

Some potential health risks that intact (non-spayed) females encounter are mammary tumours, uterine and ovarian cancers, pyometra (infection in the uterus), unwanted pregnancies, possible cesarean section, as well as many unwanted bad behaviours associated with the hormonal changes animals go through while in heat.

Spaying your pet before her first heat significantly decreases or eliminates some of these risks. Research has shown that a female has a 75% chance of developing mammary cancer after their first heat, 25% chance after her second heat, and 100% of unspayed females will develop mammary cancer in their life. Also, the cost of a spay is significantly less than any of the procedures that would be required if she did develop any problems. A cesarean section surgery costs thousands of dollars, and pyometra can often be fatal.

Some potential health risks that intact (non-neutered) males encounter are testicular tumours, testicular torsion (the testicle twists around its blood vessels and dies), prostatitis (inflammation of the prostate), paraphimosis (prolonged erections that can require amputation of the penis), unwanted litters, urine marking, inappropriate mounting, or aggression associated with the excessive testosterone that is being produced by the testes.

Neutering your male before he becomes sexually mature eliminates the need to roam by 90% and decreases aggressive behaviours by 60%, urine marking by 50% and inappropriate mounting behaviours by 70%.

How old should a dog be before neutering/spaying?

We usually start to spay and neuter dogs around 5-6 months. This surgery is recommended for your pet before they have their first heat, usually before 6 months of age.

How much does it cost to neuter/spay a dog?

The cost of spaying or neutering may vary with each pet. Many things are involved in giving you a treatment plan, such as age, weight and overall health. We also require that your pet’s vaccines be up-to-date and at the time of the surgery. Feel free to give us a call to speak with our knowledgeable staff about this important procedure and any questions you might have on pre-anesthetic blood work, microchips, retained baby teeth, etc. 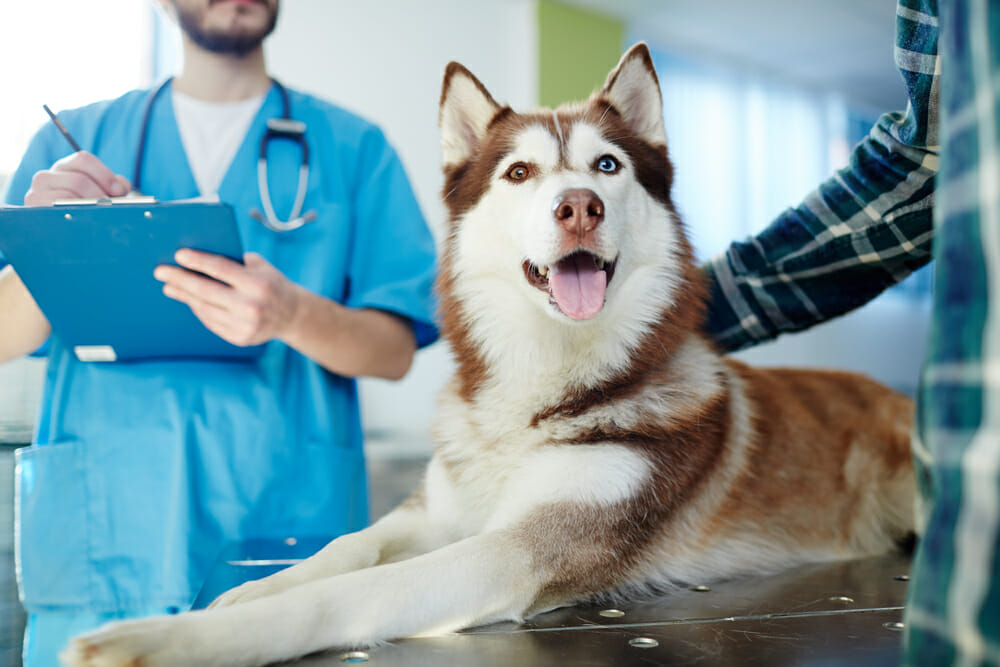 Vaccines and Why My Pet Should Get Them?

Whether it be humans or pets we all know that immunizing against diseases is the best tool for preventive medicine.

With recent changes to restrictions on businesses, we have made some important updates to our operating policies.

1. WE CAN NOW SEE ALL CASES BY APPOINTMENT ONLY

2. SAFETY MEASURES TO KEEP EVERYONE SAFE

Have you welcomed a new furry family member to your home? We’d love to meet them! Visit our Must Know New Pet Owner Information page for useful resources and helpful recommendations for new pet owners.

Thank you for your patience and understanding and we look forward to seeing you and your furry family members again!