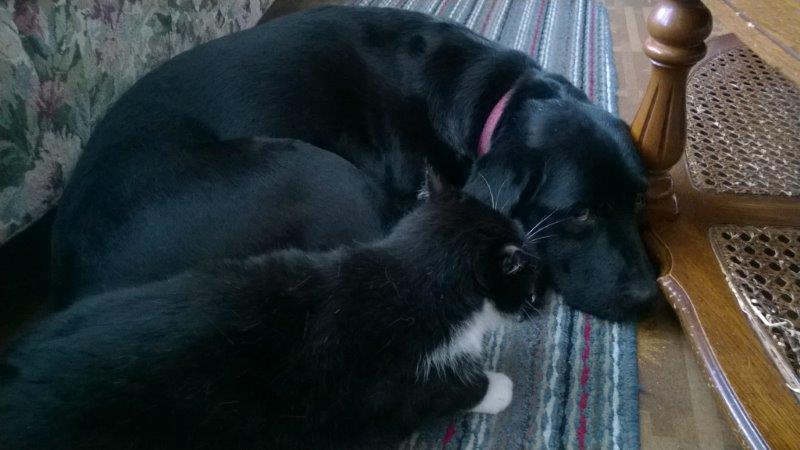 I have always been in awe of the relationship between different species of pets in the same home.  I have a dog and 3 cats. The dog I currently have is a very timid, sensitive, lazy black lab. Yes, there is actually such thing as a calm, quiet Labrador Retriever! But there is a problem. She will not stick up for herself with my male cat, Murray.

Now Murray fancies himself as assistant boss of the house. He has decided from the first day Angel came in, that he would have to keep her in line. Now anyone that has ever had a cat knows – if the cat makes up their mind, you are not going to change it.

So, the first ‘issue’ that came up was when Angel helped herself to some food on the counter. Murray was sitting in the kitchen watching and listening as I reprimanded Angel. He then decided I needed help to get my point across. Like the speed of lightning, he took off running at Angel, while literally screaming, sat on his haunches and started slapping her silly! (He has no claws, so he didn’t hurt her.) Poor Angel had no idea what was happening or what to do so she just stood there while Murray told her off and kept slapping her. Knowing how sensitive poor Angel is, I quickly got the situation under control. Angel dropped her head and retreated to one of her beds in the living area where she laid for quite some time refusing to move. I gave her a treat and tried my best to get her to get up and play, but no way was she going to move and chance the wrath of Murray again.

The next episode was when Angel was outside. I was letting her in the door, and for no reason whatsoever, Murray walked, I should say strutted, around the corner, laid his ears back and swatted her in the face and then left. I have no idea what that was about. I’m pretty sure the dog didn’t know either. You must understand, between episodes – which could go a month at a time – there is no problem, and they get along fine. One night during Angel’s playtime, which lasts about a minute or two, she ran by the cat to get her toy and bring it to me. Once again, Murray took offence, and the screaming started. Angel stopped dead in her tracks, and Murray was already on her, swatting her in the face.

I can only take it that Murray felt he had been in danger of being run over and felt the need to ‘smarten that dog up’ or maybe he felt there shouldn’t be any running in the house. I have no idea. Once again, here I am trying to console the dog who at this point is terrified while the cat walks away, tail straight up as though he had just done his job well. Later that night, the cat is sitting on the night table, and the dog is beside the bed. Next thing I know the cat is licking the dogs face. I watched with interest wondering is this an apology? Didn’t matter. The look on Angel’s face said it all. Terror! She had no idea what the cat was doing or why. Is he testing me and going to bite? She didn’t stick around to find out. She quickly retreated to her bed and hid her face.

I have to admit, it was kind of funny. Another thing in Murray’s repertoire is to block Angel from going anywhere. For example, if Angel wants to move from the living area to her water dish, Murray will sit sideways at the midway point – not looking at her – and refuse to move. Typical blocking behaviour from a cat. Dogs apparently understand this as Angel will immediately turn around and retreat. I’m pretty sure Murray does this for fun. I don’t know how many times I have been calling Angel from another room and she doesn’t respond. When I go to find her, she’ll be sitting on the floor waiting for me with the cat sitting in the way. She will not pass the cat! Even with me standing there saying its ok, come, she will not move until I have moved the cat. Even now while I’m writing this, I can hear Angel pacing the hallway wanting to come in the office, but Murray is sitting in the doorway.

I have to admit that Murray does not do this exclusively to Angel. I have had the occasion to care for others dogs, and he is definitely not selective. He has exhibited this same behaviour with others. I watch a friend’s rather large hound lab mix, and he is also very cautious walking around Murray. As I have him quite often, I have to laugh when both he and Angel walk past the cat to go outside. They will both turn their heads in the opposite direction of the cat. People call this snubbing. I think the dogs call this self-preservation. They both have discovered that he will not do anything to them if they ‘snub’ him.

I don’t imagine that I will ever find a way to get Murray to stop the behaviour, but I will continue to try new things. Nothing has worked so far. I can be thankful that most of the time they can coexist with no problems.