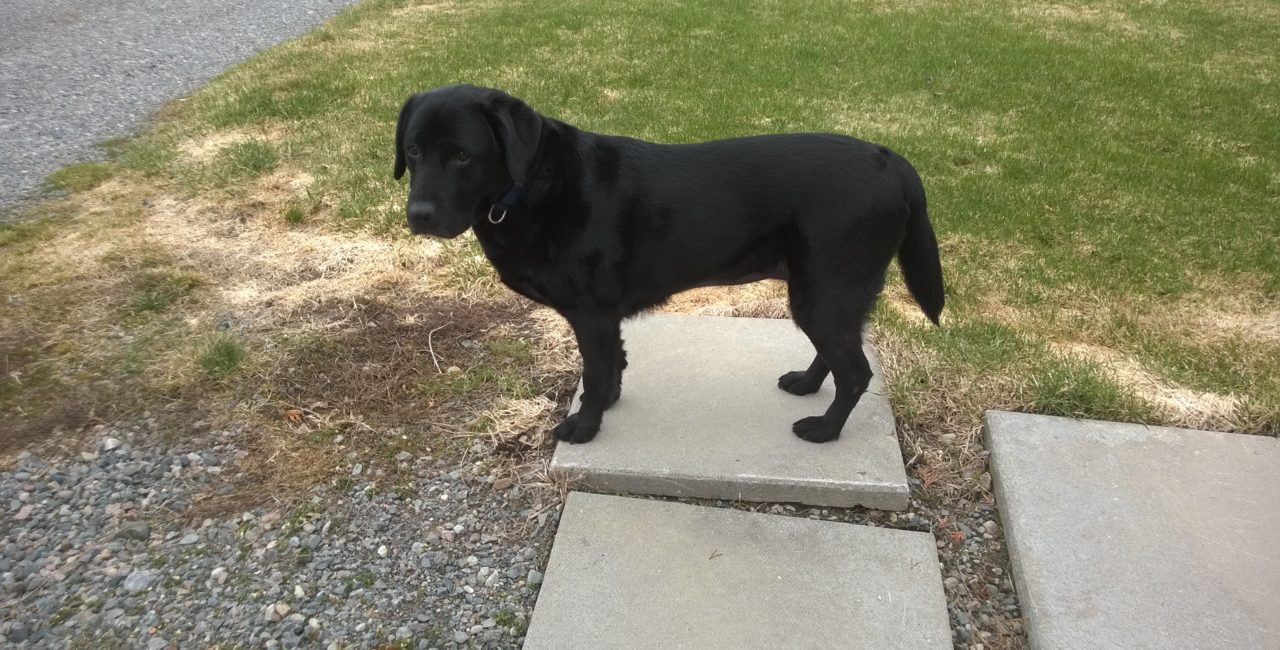 Saga of the Black Cloud

I’ve often felt I have a black cloud following me around when it comes to my pets health. Those that know me know that if anything strange or weird will happen, it will happen to my pets. If my pets get sick, they never seem to have something that’s easily diagnosed, treated and then be over.

Simple ear infection? Not for me. My pets only get things that no one has ever seen before or heard of. It’s getting very frustrating, to say the least. But, I take my pets health very seriously and will always do what has to be done.

The latest episode is Angel. She is an 8 yr. old purebred English Labrador Retriever. She was given to me by a breeder and her husband who had decided to retire from breeding and needed to rehome her. She was 5 yrs. old when I got her and very healthy.

The FIRST thing I did was get pet insurance. After the last 2 dogs I had – which ensured my Freedom 55 plan increased to Freedom 105 – there was no way I was taking any chances. Granted, I couldn’t get the insurance for the last 2 due to predisposed conditions. So I signed up Angel.  For the first year, all was well, but I wasn’t fooled. Being in the industry for 17 plus years, I well knew how fast things could change. And change they did. She suddenly felt violently ill calling for an emergency vet visit and follow up to our regular vet. She had been poisoned. After many visits, tests and tears, she recovered. Then all was well again. But this was not to last.

Next on the agenda, was a sudden and drastic weight loss with ongoing vomiting. Numerous visits, tests, x-rays, medications, food changes revealed nothing definitive. She was like a yo-yo. Treatment would work for a short time then she would crash. Then on to the next treatment. It was trial and error. We then opted to have a scope done. Hopefully, that would be more conclusive. Nope. Course not. Nothing was obviously wrong, so tissue samples were taken and sent to the lab. These samples even confused the lab veterinarian. Why would my luck change now?

Finally, we took the final course of action. She went in for exploratory surgery. This was to reveal the problem. She had a blockage in her jejunum (middle segment of the small intestine) which the doctor had never seen before. Not that high up, as he put it. It was thought to be a tumour but upon further investigation was found to be stomach contents that had adhered to the wall of the intestine. We’ll never know for sure what caused it as there were no foreign bodies. It is thought to be a possible rupture in the intestinal wall, and the bodies attempt to ‘plug the hole’ using anything it could to protect itself. In order to fix it, the doctor had to remove that piece of her intestine. He assured me she would do fine.

He didn’t know my previous luck! She was relatively ok for the next couple of days, and then the fun started. I expected drainage from the area as it’s normal. She was laying on the floor resting at home. I checked on her, and all was fine. I peeked at her a minute later, and there was, quite literally, a flood around her. Grabbing a towel to mop it up, I checked her, and there was a constant flow of drainage like a running hose. 911 text to the vet with a picture. Of course, this is on a weekend. So now we’re back to the vet. She has managed (without moving) to rupture her abdominal wall and accordingly to the vet, is quite massive. Really!! It’s rare, but it happens, I’m told. Why am I not surprised. Course it happens to my pet! Now she requires a second surgery to repair this. It’s not anyone’s fault, it’s just one of those things that can happen with a major surgery such as this. It turned out to be a blessing in disguise as it allowed the fluid buildup in her abdomen to drain. The bodies ability to protect itself is simply amazing!

After 3 weeks, numerous 911 texts, phone calls and visits, she finally seems back to her old self and healed. I finally stopped holding my breath every time I looked at her and was able to relax. She actually wanted to play, go for walks. I hadn’t seen her like this in a very long time. I guess because I see her daily, I hadn’t picked up on the very slow and gradual changes in her activity and spirit.

HA! Nothing like that false sense of security. She jumped out of the back of the vehicle the other day and let out a blood-curdling scream! Oh geez, what now? I was actually hoping she hurt a leg! No, course not. Back into the vehicle, breaking all speed limits back to the vet. It’s amazing how much power a 4 cylinder has when you push it. After a quick exam, it was concluded that she had most likely further torn her abdominal wall. We can’t do anything until she has finished healing from the first surgery before anything can be done.

She has been given the all clear now for her second surgery which will take place in 2 weeks. I can hardly wait to see what adventures we will face after this one! I’m really hoping that black cloud is gone. All I can do is try to remain optimistic. She will get through this and so will I. I’m just hoping that this time will be uneventful. Go away black cloud!! Thank God for pet insurance.

What have I learned from my experiences? I have learned that nothing is guaranteed and we can only do the best that we can do. Also, never to give up. There is always a light at the end of the tunnel. It may not be the light we are looking for but the light that the pet needs. There is a silver lining on each and every raincloud. We just have to look for it. And most importantly, you are never alone in your search for healing or understanding. Most of us at the clinic understand the terror, heartbreak and frustration of having a pet that’s not well. We’ve been there. We know how you feel. Chances are pretty high that we have gone through, if not the same, very similar circumstances.