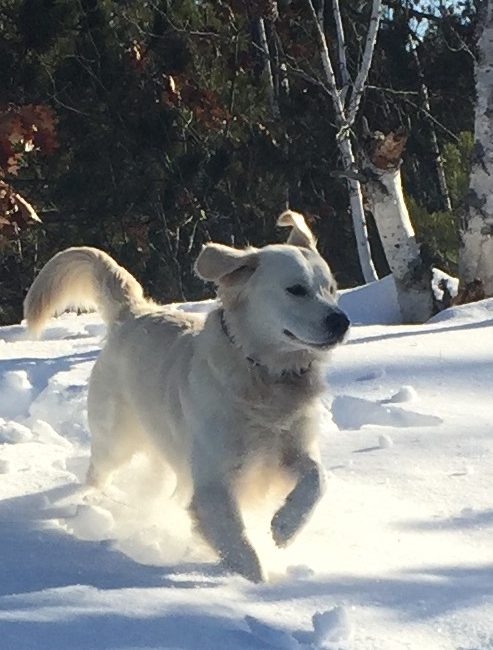 “ Mister Golden Retriever “ – that is what I hear almost every morning when my Dad saw me.  I’m Cooper a 14-month-old Golden Retriever. You already know my crotchety brother Boomer the Jack Russell! I am going to tell you how we met.

It was a dark and stormy night – actually, it was New Year’s Eve Day 2015 and the weather wasn’t great, but it was sure dark out. The door opened, and I went bounding into my new home only to be met by the Terrorist. He looked at me, snarled a string of canine profanities, stood his ground and turned to mom and dad! I was too excited to see the rest of my home so went on by.  However, as I grew bored of exploring, in true puppy fashion, I wanted to know my new flatmate better.

My new mom and dad, of course, knew all about the Terrorist and his “love” of other dogs; so they were prepared. I guess this is the first place to start – know the dogs, and I mean breeds, temperament, ages, etc.  before starting a new introduction. Boomer had shared space with other older dogs but never a puppy like me. I, of course, had known only happy, friendly dogs – nothing like the angry little tough guy in front of me now. We agreed to disagree – sort of. I got snapped at again, so we called that Lesson 1. Don’t mess with the Jack Russell!

Every day I would try with my mom and Dad’s help to engage Boomer. Finally, one day we found a common like – tug of war toys. Now the rope needed to be long, so I didn’t get snapped at, but we started slow. As toys are a resource for some dogs, my mom and dad were aware that Boomer liked his toys. Since I did not know which ones were the favourites, mom and dad guided the ones that were mine and shifted me away from Boomer’s toys! Dad always wanted to watch Boomer, and I do the tug of war thing, so he referred many daily matches during our early days together.

We ate at the same time, in different places – I gobbled my food and wanted to eat Boomer’s too. That was strictly forbidden – I think you can guess why J! We slept in two different areas, as I had a crate and Boomer had the bed. Every day we interacted a little bit more, with only minor canine profanities thrown at me!

A year later, we are the best of buddies. The Terrorist still tries to tell me how life is, but as a big burly teenager, I don’t think the old man knows anything. We have developed a mutual respect, eat together, wrestle together, and play tug of war. I admit it is a bit one sided but the little guy gets an A for effort and tenacity.

If you got a new flatmate for Christmas, and have other dogs, do some learning first before introducing, and things will go as well as they can. Remember don’t mess with the Jack Russell even if you are way bigger!