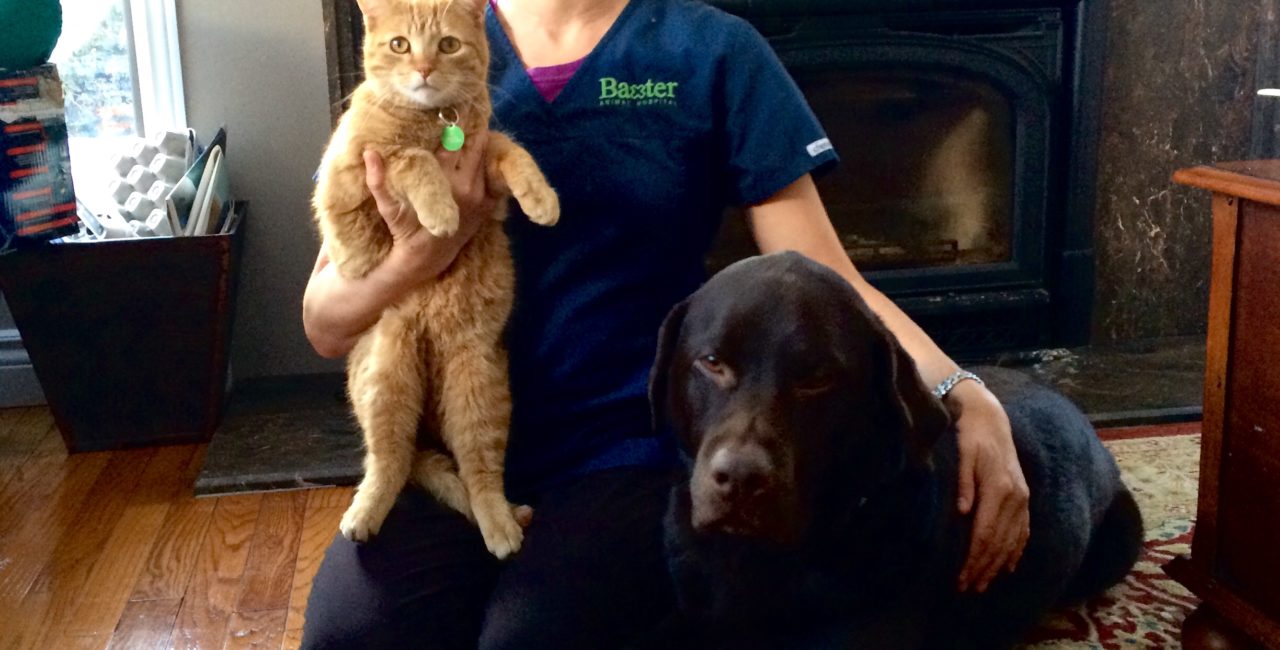 Reese is a 4 year old Chocolate Lab who lives with Dr. Maskery and her family. He is extremely friendly and loves all people and other dogs. He especially loves his cat housemates Paprika and Rudy. He is kept very healthy with lots of exercise, a great dog kibble called Hills Prescription T/D and regular brushing.  He is on a year round parasite prevention called Advantage Multi to make sure he doesn’t pick up and fleas, mites or intestinal parasites from his dog friends or from the environment.

Reese has a problem though: He eats everything in sight. This is why we call him “Reese the Bad Dog.”  Reese had eaten many utensils including several spatulas, wooden spoons and whisks. He has taken every type of bowl, cup, plate and mug from our counter and table and brought it to his crate or the living room in order to thoroughly clean. It is not unusual to catch him walking through the house with a large butcher knife or a cutting board he stole from the sink. He has eaten so much Tupperware I can’t even count. He often just chews off the lids and licks out the inside of the Tupperware leaving us with many lidless containers (and no, you can’t buy just lids). He even stole a container of markers, opened it and sadly discovered it was not full of food.

Reese the Bad Dog steals food from the counter at least daily.  Even though we try and keep the counters and tables clear he seems to be able to get to everything.  He has eaten large bricks of cheese, an entire bag of oatmeal as well as 16 single servings of oatmeal, a pork roast marinating, bags of bread, Halloween candy, pancakes and even 9 boxes of Kraft dinner. He didn’t actually eat the pasta in the kraft dinner, just opened the boxes, spread the pasta around and ate 9 cheese pouches (swallowed whole). One day he licked out a cast iron frying pan we left to cool on the stove that had 3″ of cooking oil in it.  This is one of the few things that actually made him sick.

He has broken in to the cat food countless times and polished off the entire bag. Then he feels very full and sorry for himself for a few days.  He even ate the entire green bin full of rotting food one day (this I blame on the cat who opened the door for him).

Sometimes Reese eats so much gross stuff on a hike he gets very ill. I will spare you the details but nothing in 15 years of being a vet has ever rivalled the Great Barf of 2013.  Let me just say my husband got a phone call at work from a crazy screaming woman yelling “come home right now and bring a rental carpet cleaner with you”.

Reese definitely gets fed enough. He is in good body condition and gets plenty of exercise. He just can’t seem to help himself.  Given the chance he will also break in to the cat box room for extra treats. A handy cat flap installed on this door has really  helped with this problem.

He is also a runaway dog.  He will take off at a moments notice unless he is on a hike and I have a cheese string in my pocket.  One day when I didn’t have cheese he took off during a lovely spring hike and ran all the way to the Best Friends dog kennel and jumped up at the door until they let him in.  When he runs away we usually just go home and wait for the phone call.  It always comes.  He has a name tag with my number on it and someone always calls.  He is also microchipped but so far he hasn’t been gone long enough to use this.

We love Reese and even though he can be a very bad dog he is part of our family and I wouldn’t trade him in for anything (most days)!